What to Look For

A new or active infection appears as wet slime on the main trunk, usually originating from a wound (such as a pruned branch or opening in the bark). Older infections appear as a yellow-brown discolouration on the trunk or a light grey or white crust. The slime that drips on to grass or vegetation beneath the infection may cause dead patches. This condition is quite common among Winnipeg's elms. 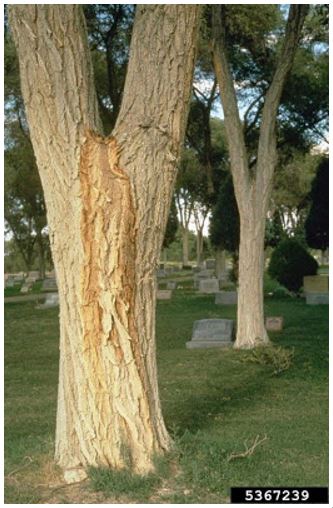 Various species of bacteria cause bacterial wetwood or slime flux that occurs just under the bark. Bacteria enter the tree through pruning wounds, bark cracks, or branch crotches and interact with the tree sap's sugars. This process results in gas and pressure builds beneath the bark until it squeezes out through cracks or wounds in the bark. The slime is toxic to the surrounding cambium and may prevent the injury from completely healing itself, though it does not appear to affect tree structure or strength significantly.

Be careful when pruning to avoid wounding branches. Protect trees from root damage and soil compaction. Periods of drought may increase the occurrence of slime flux, so you should water during drought conditions.