Emerald Ash Borer (EAB) is an invasive wood-boring insect from China and eastern Asia that was introduced to North America in 2002. EAB attacks and kills healthy and stressed ash trees, and all ash species are susceptible to it to varying degrees.

On November 30, 2017, EAB was officially confirmed in Winnipeg. It is still uncertain the extent EAB will have in Winnipeg. In other cities, up to 99% of ash trees have been lost. It is estimated that there are approximately 356,000 ash trees, making up about 40% of Winnipeg’s urban forest.

Other cities that have experienced EAB have lost up to 99 % of untreated ash trees within 2 to 10 years. However, once an ash tree dies from EAB, it dries out quickly and can become unstable and hazardous. Many of Winnipeg’s ash trees are large, mature shade trees, meaning once they start to decay, there may be risk to people, property, and vehicles.

What to Look for:

It usually takes time for trees infested with EAB to show signs of decline, but once they do, symptoms generally include:

If you notice any of these signs, contact us or 311 right away. 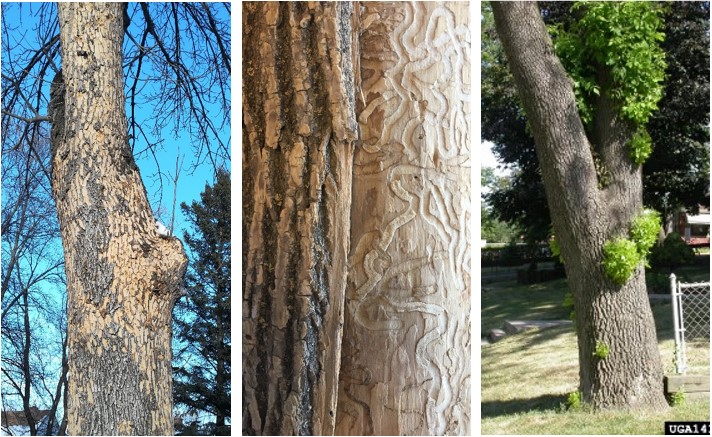 How to Prepare For EAB

Female EAB deposits their eggs in bark crevices or under bark scales. Once the eggs hatch, the larvae (immature EAB) will chew beneath the bark. The creamy white larvae are responsible for most of the damage. The larvae feed just under the bark and create S-shaped tracks as they move throughout the trunk. These tracks disrupt the flow of water and nutrients up to the tree, causing the tree to die. As the larvae grow into adult beetles they chew their way to the bark surface and leave behind D-shaped exit holes.  The adult beetle has a shiny emerald or coppery, green-coloured body and is 7 to 8 mm long. The adult beetle will feed on the leaf of ash trees, which results in minimal damage in comparison to the damage inflicted by the larvae. 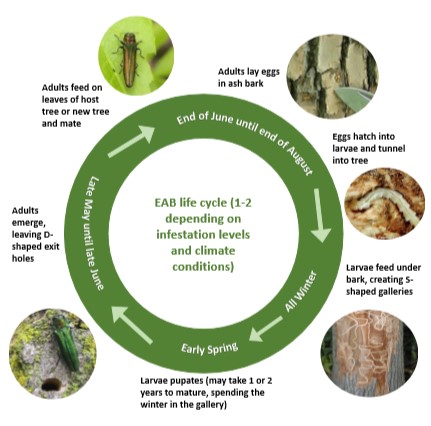 Other Threats to Ash Trees

Emerald Ash Borer is not the only invasive species infesting our ash trees. In 2017, Cottony Ash Psyllid (CAP) aka. Jumping Tree Lice was confirmed around the Forks and has since spread widely throughout our city.

How to Identify an Ash Tree

Green, black, and Mancana ash (aka Manchurian ash) can be found within Winnipeg. Green and black ash are native species to Manitoba, naturally found in riparian forests. Both species are also commonly planted in urban areas. Mancana ash (or Manchurian ash) is an ornamental ash from Asia and has also become very common in our communities.

Leaf: Compound leaf – meaning there will be 5 to 9 leaflets on a single petiole arising out of a single bud. Each leaflet is serrated, oblong, and pointed.

Bud: Opposite bud arrangement – meaning that two buds will arise side by side on a twig (apart from the bud on the end of the twig). The terminal (end) bud will be flanked on either side by another bud.

Bark: Green Ash is distinguished by its thatched diamond-shaped bark grooves. The grooves deepen as the tree matures. Black ash will have very smooth grey bark when young and then develop warty bark, which feels corky when manipulated. Manchurian ash is a non-native species planted in Winnipeg and has smooth beige bark, which develops very shallow linear grooves as the tree matures.

Form: Green ash and black ash usually have a strong single leading stem that can be seen stretching almost to the top of the tree. Green ash may also have co-dominant stems (two competing leading stems). Manchurian (also called Mancana) ash typically has a trunk that splits into many stems after a short way up and has a very round canopy (sometimes resembling a lollipop).